Ukrainian Canadian Servicemen’s Association (UCSA) [Союз Українських Канадійських Вояків] – an association of men and women of Ukrainian descent serving in the Canadian armed forces based in the UK and other European countries during the Second World War. 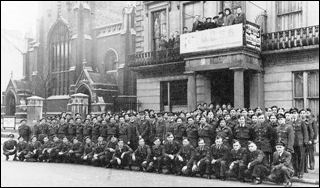 UCSA was formed on 7 January 1943 in Manchester, to cater for the social and cultural needs of Ukrainian Canadians serving overseas. Initially the association had 37 members. By the end of the war there were 1,500 active members and over 3,000 additional names on the association’s mailing list.

The UCSA organisers established contact with the Ukrainian community in Manchester, whose Ukrainian Social Club became the first meeting place for UCSA members. Later in 1943, with financial assistance from the Ukrainian Canadian Committee, the association began to rent a building at 218 Sussex Gardens, London W2. This became the new UCSA headquarters and the home of the UCSA Services Club, which was officially opened in April 1944.

UCSA organised social gatherings, or “get-togethers”, for its members, initially in Manchester and later also in London. A choir and a dance orchestra were organised at the London club, and a library and reading room were maintained there. The association’s activities also included visiting sick and wounded Ukrainian Canadians, compiling lists of those who had died or were taken prisoner, and looking after the graves of the dead (at various cemeteries in the UK, including Brookwood Military Cemetery near Woking, Surrey). From September 1943 the association published an UCSA Newsletter.

UCSA sought out Ukrainians serving with the Canadian forces in continental Europe, and in the months after the end of the war organised social gatherings in Brussels (twice), Paris and Rome. An UCSA Services Club was formed in Brussels, and in Rome a Central Mediterranean Branch of UCSA was set up. Many Ukrainians in the US armed forces based in Europe became UCSA associate members. Contacts were also established with a number of Ukrainians in the Polish Armed Forces under British command in the UK, and with several Ukrainians living in London since before the outbreak of war.

Towards the end of the war UCSA members began to provide assistance to Ukrainian displaced persons and refugees in continental Europe. To separate this work from mainstream UCSA activities, the Central Ukrainian Relief Bureau (CURB) was formed, with headquarters at the UCSA building in London. Leading UCSA members were also involved in the formation in January 1946 of the Association of Ukrainians in Great Britain (AUGB). On 10-11 November 1945 the UCSA Services Club in London was officially closed, although the Sussex Gardens premises continued to be used by CURB and the AUGB. On 9 January 1946 UCSA was formally disbanded. Its activities were continued in Canada by the Ukrainian Canadian Veterans’ Association, formed in June 1945 by returning service personnel.